However we know from Wachsmuth’s recollections that Stegemann was the first to get and implement agricultural indications from Rudolf Steiner as early as 1921 and put them into practice on his own land – a 140 Ha farm (later mentioned as 500 acres) at Klostergut Marienstein near Göttingen. Paull says that he was made co-chair of the Experimental Circle by Dr Steiner, alongside Count Keyserlingk. According to Manfred Klett, Stegemann, in contrast to the Count, thought that the full esoteric side of biodynamics should be front and centre rather than emphasise the practical outcomes.

Ernst Stegemann was a major co-initiator of Rudolf Steiner’s Agricultural Course (GA 327) in 1924 and shaped the “dynamic” part of biodynamic farming throughout his creative period.

After cultivating the grounds of the women’s school in Reifenstein as a young farmer, he had early concerns about whether mineral fertilizers could be beneficial to the life of the soil in the long term. About such concerns, which also affected the future of the quality of food, he came into conversation with Rudolf Steiner around 1920. He reacted immediately and in 1922 gave the first indications of a change in the way agriculture was handled. Stegemann implemented this information directly on the 140-hectare farm at Klostergut Marienstein near Göttingen, which was taken over under lease. This “jerky” changeover of the company can be understood as an expression of an unconditional essential aspect of Stegemann’s life.

In addition to Carl Graf and Johanna Countess von Keyserlingk (Carl Graf von Keyserlingk), Stegemann was one of the key co-initiators of the agricultural course. And so he also had the honor of addressing a few words to the 135 participants at the beginning of the meeting at Schloss Koberwitz.

After the agricultural course, he was particularly interested in the work of the experimental group of anthroposophical farmers, which he chaired in 1929 and held until the ban in 1941. At the meeting of the Versuchsring on Marienstein he was greatly supported by his wife Gertrud (née Kricheldorff), with whom he had four sons. All of these meetings were based on a special striving for inwardness, just as Stegemann’s entire striving was aimed at firmly anchoring the esoteric in real life. And so it was no coincidence that Stegemann presented new, trend-setting methods in catch crop and mixed crop cultivation in practice. The aim was not only to improve the methods of agriculture, but the action was inspired by the desire to consistently improve the quality of food. But he knew: All of this can only succeed if deep inner work is based on everything. And so even the work breaks were used sensibly with a focus on inner work.

The following striking moments in biodynamic history are closely linked to Ernst Stegemann:

At first Rudolf Steiner was inspired by Stegemann’s questions to give the first biodynamic indications. Then, through conversations between Stegemann and Steiner, the important hint is known that future cultivated plants should be grown out of today’s wild plants. Furthermore, Ernst Stegemann was given the so-called seed meditation by Rudolf Steiner, which accompanies many farmers in their work to this day.

However, there are also some incidents that occurred after 1924: In 1929 a conversation with Erhard Bartsch gave rise to the name “biodynamic”, which does not go back to Steiner: Erhard Bartsch had voted for the anthroposophical method Agriculture to be called “organic farming”. Stegemann, however, advocated the term “dynamic farming”, which is probably related to his deep connection to astronomy and weather events. The term “biodynamic farming” is attributable to the combination of these two approaches.

Also noteworthy is the very good sense of taste that Ernst Stegemann had, who was a sure guide to him even with the growing recommendation for dried instead of acidified beet leaves testifies to this fine sense.

Ernst Stegemann as the “landlord” did not shy away from contact with the farmers. He liked going to peasant gatherings and put aside his otherwise noble Hanoverian reticence to a certain extent.

All of his sons had to move to World War II. The management of Gut Marienstein was almost impossible to maintain. Stegemann died here in 1943.

Stegemann was given this meditation by Dr Steiner: 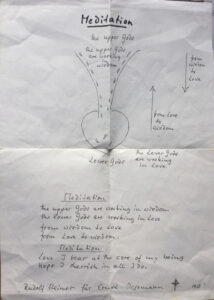